Our coaches have amassed over two dozen individual NCAA Championships as coaches, a multitude of World and Olympic Team Members, and culminating most recently with a bronze and gold medal in the last two Olympics.

The Pensacola, Fla., native, leads the RTC after a two-year head coaching stint with the Stars, where he led them to a sixth-place finish at the 2020 NAIA championships.

Prior to his time at OCU, Hazewinkel spent two years at UCO as the assistant coach. He helped the Bronchos amass 31-5 record in duals, including the program’s first unbeaten dual record in 2016-17.

Hazewinkel helped Bronhco, Eli Hale, to a pair of national championships at 125 pounds.

In addition to Hazewinkel’s previous coaching experience, he also has extensive international and NCAA Division I experience.

A four-time All-American at the University of Oklahoma (2004-2007), Hazewinkel is a two-time Big 12 champion and was the runner-up at the NCAA Championships in 2007.

On the international platform, Hazewinkel has represented the United States at the 2012 Olympics in Paris, France in both freestyle and Greco-Roman and again at the 2018 World Championships in Budapest, Hungary. He has competed on nine U.S. national teams, six Greco-Roman and three Freestyle. Hazewinkel is also a two-time freestyle Pan American gold medalist.

He earned a bachelor’s degree in communications from OU in 2007. Hazewinkel and his wife, Rachel, live in Oklahoma City with their two kids Josh and Ava. 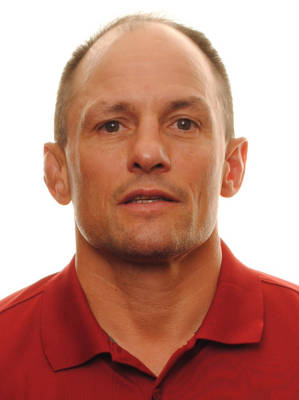 Lou Rosselli was named the head wrestling coach at the University of Oklahoma on August 30, 2016. Rosselli comes to Norman after spending 10 years on the Ohio State coaching staff.

Rosselli was promoted from Buckeyes assistant coach to associate head coach following the 2008-09 season after helping lead OSU to NCAA runner-up finishes in 2008 and 2009. He also played an integral role in helping deliver the program’s first national championship in 2015.

A native of Middleport, N.Y., Rosselli was named the 2009 National Wrestling Coaches Association Assistant Coach of the Year and the 2014 USA Wrestling Freestyle Coach of the Year. He mentored four-time NCAA Champion Logan Stieber and two-time champ J Jaggers.

Additionally, the Sooners’ new head coach has had a large presence with USA Wrestling and has served as a volunteer coach for the U.S. Olympic Freestyle Team at both the 2016 Rio Games, where the U.S. earned two medals (one gold), and the 2012 London Games, where the U.S. won three medals (two gold). As a three-time U.S. Freestyle World Team Coach, Rosselli led his squads to third-place finishes at the 2006 and 2011 FILA Wrestling World Championships, and to a fourth-place showing in 2007. He was named the 2007 Terry McCann Freestyle Coach of the Year for his efforts. Rosselli, the 14th head wrestling coach in OU history, was named to the 2015 USA Wrestling coaching staff for the 2015 World Championships, and his 2009 team earned gold at the Pan American Championships. In 2010, he coached the U.S. World University Games Team, and he served as assistant coach when the U.S. placed third at the 2005 World University Games in Izmir, Turkey.

A two-time All-American, Rosselli wrestled collegiately at Edinboro from 1989 to 1993. He was named the Pennsylvania State Athletic Conference and Eastern Wrestling League Championships Outstanding Wrestler in his senior season and was a three-time PSAC champion at 118 pounds. In his rookie season, Rosselli was named the EWL Freshman of the Year and became the first freshman from Edinboro to qualify for the NCAA Championships.

Rosselli earned the Young Alumni Award from the Edinboro University Alumni Association and has been named to the Edinboro, Eastern Wrestling League and Greater Buffalo Sports halls of fame.

Prior to his stint with the Buckeyes, Rosselli served as a volunteer assistant coach at Edinboro for three years before being promoted to assistant coach for eight seasons. Rosselli earned a bachelor’s degree in health and physical education from Edinboro in 1993.

Rosselli and his wife Amy are parents to Jordan, Ty and Jaxson.

The OKRTC on Social Media